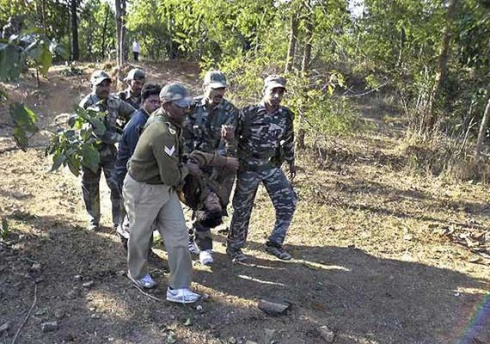 Security forces today had their arms up with the killing of a top Maoist leader in Gumla,Jharkhand.The Maoist leader was identified as Sanjay Yadav.
Yadav was the CPI(Maoists) zonal commander who caried a bounty of rs 10 lakh on his head.
Reports reaching Ranchi said that a joint team of CRPF and Jharkhand Police killed Yadav following an encounter in the Konrebera-Palkot area of Gumla.

ACCORDING TO GUMLA SSP BHIMSEN TUTI, YADAV WAS ON HIS BIKE WHEN SECURITY FORCES INTERCEPTED HIM. WHEN ASKED TO SURRENDER HE LEFT HIS BIKE AND STARTED RUNNING TOWARDS THE DENSE FOREST. CRPF AND POLICE JAWANS FOLLOWED HIM.
“During the encounter,Yadav had fired many rounds at the security forces. However,he was shot dead in the encounter”,said a senior police officer.
In all,nearly 60 live bullets, a pistol and a machine gun were recovered from him.