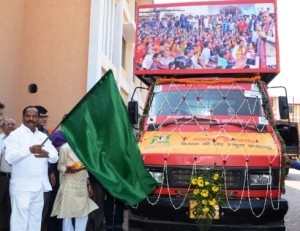 Jharkhand Government today launched a plan to mobilise people by informing them about its development schemes through vehicles equipped with LED Display Screen.

In all,28 vehicles,each carrying LED Display Screen,were acquired by the state government.They were flaged off today by Chief Minister Raghubar Das.

“Many people in rural areas were not literate.This made us procure these vehicles,each carrying one LED display screen,to make them know about the development works being implemented by the state government”,said the CM.