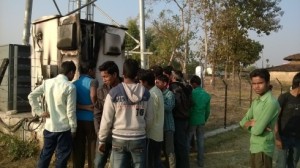 The incident is reported to have occurred at 3 A.M.on Friday when the CPI(Maoist)ultras triggered two land mine-blasts.Result?

At Newari Panchayat in Latehar,the Panchayat Bhawan building and the Mobile Tower of the Airtel were damaged.No casualty was reported.

The Maoists under the banner of Marxist Communist Centre of India(MCCI) had taken the responsibility of the crime.In a pamphlet left behind by them near the site of the crime,they blamed the Maoists’ another outfit called ‘TPC’ responsible for joining hands with the police and claimed that the blasts were carried to protest against it.