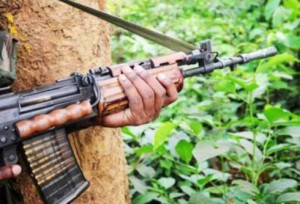 Four Maoists were killed on Friday morning following an encounter with security forces in Taimara valley on NH-33 and four firearms were seized. The police have recovered four dead bodies and a process to identify them is on. All the four dead Maoists are in Naxal fatigue.

The operation began on tip-off on Thursday night and ended on Friday morning. Ranchi SSP Kuldeep Dwivedi, who led the operations, said intermittent firing continued throughout the night.