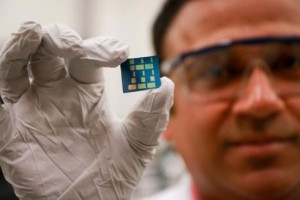 Engineers, led by a scientist of Indian origin, have discovered a new kind of 2D semiconducting material for electronics that opens the door for much speedier computers and smart phones that also consume a lot less power.

The semiconductor, made of the elements tin and oxygen, or tin monoxide (SnO), is a layer of 2D material only one atom thick, allowing electrical charges to move through it much faster than conventional 3D materials such as silicon.

This material could be used in transistors, the lifeblood of all electronic devices such as computer processors and graphics processors in desktop computers and mobile devices, making them 100 times faster than regular devices.

The material was discovered by a team led by University of Utah materials science and engineering associate professor Ashutosh Tiwari.

A paper describing the research was published online in the journal Advanced Electronic Materials.