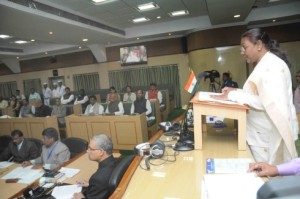 The 2016 budget session of the Jharkhand Assembly began today with Governor Droupadi Murmu delivering speech on the floor of the House.

“The government is committed to work for development of the State”,she said.

This was followed by the state government tabling the third supplementary budget for the year 2015-16 on February 16.

The session is going to function till March 18.During this budget session,the Assembly is scheduled to function for 23 days.

Chief Minister Raghubar Das, who also holds the Finance portfolio would be tabling the annual budget of the state for the year.