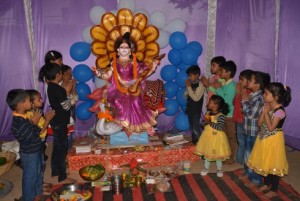 The puja was performed in almost every area of Ranchi and its adjoin towns and villages in Jharkhand.

As it is,Sarswati puja is held on the month of Magh as per as Hindu calander.It falls on Basanth Panchami, fifth day of amavasi.

Traditional belief is that Goddess Saraswati,goddess of knowledge, art and music, and wisdom, represents the creative and inspirational aspect of Shakti.

As such,Saraswati puja is observed during that period of the year when Nature is afresh and blossoming after a harsh winter. Thus symbolically the puja represents the removal of gloominess and ushering in of freshness.

This day small children and students are used to write few letters after puja.”This was done to gain Her blessings and get knowledge of the world of letters and knowledge”,said a historian.

This festival is popular in Jharkhand,Bihar,Orissa and West Bengal where almost every Hindu family worship Ggoddess Saraswati.