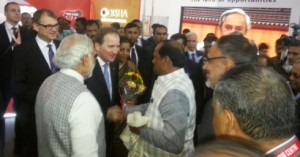 Jharkhand Chief Minister Raghubar Das was present there.Both the Centre-State has described Make In India as Asia’s largest multi-sectoral exhibition with participation of 1,000 international and 8,000 Indian companies and heads of state of half a dozen countries.

While addressing the audience,Prime Minister Modi described Jharkhand as a minerally rich state,Chief Minister Das appealed to the investors to invest in Jharkhand.

“The scene is fine for any investor and the state is ready to welcome investors”,said the CM.