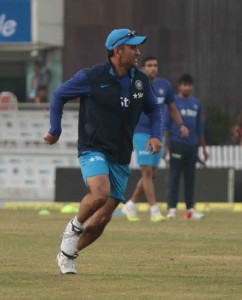 When India plays against Sri Lanka in the second T20 in Ranchi,it has a chance to clinch the three-match contest.

So because India were outplayed by Sri Lanka in the first T20 in Pune, where the home batsmen failed to cope with the Lankan bowlers, who made full use of a green pitch. India lost the match and Sri Lanka, as a result of which, took a 1-0 lead.

However,to win the second T20,India need to come up with better cricket when the teams square off at the Jharkhand State Cricket Association International Stadium Complex in Ranchi for the second T20 on Friday.

India batsmen such as Suresh Raina, Rohit Sharma and the rest will be keen to deliver in Ranchi against the inexperienced, but quality, Lankan bowlers.

Already the JSCA Stadium is ready to host the match.Today,the Indian players did practice and tried to adapt to the climate of Ranchi where the temprature was down and clouds moved in the sky.