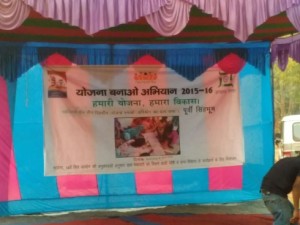 At this village in East Singhbhum district,Das addressed a public meeting and claimed that the state government had launched ‘Make Plan Campaign’ to involve villagers in the plan making for development of their villages.

“The culture of the village is the culture of India.Similarly,the state can grow only when villages grow and develop”,observed Das while addressing the people at Matihana.

Picture shows the bill board of the Yojna(Plan)Banao(Make) Abhiyan(Campaign) put up by the state government at the public meeting site at Matihana village near Jamshedpur.