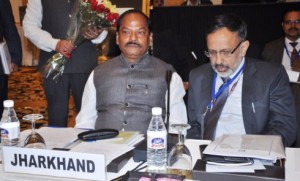 Das requested the Union government to immediately settle and eliminate the committed liability of Rs 583.22 crore identified as ‘Delinked Plans’.

”The delay in its elimination is going to add more interest on these delinked plans”,said the CM while speaking in a meeting on the “Central Budget-2016-17” organized by the Union Finance Ministryin New Delhi today.It was attended among others by the State Finance Ministers.

During his speech,the CM sought Rs 4095.30 crore financial assistance to set up Jharkhand’s new capital city and demanded financial assistance for setting up an IIT,Open University,Smart Village,Rehabilitation of the People of the Heavy Engineering Corporation and attention toward Jharia where the underground fire had threatened thousands of people.