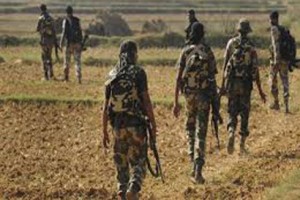 Bihar is in the news in Jharkhand where the police is under pressure of the Maoists.Now both Bihar and Jharkhand are gearing up to launch operations against the Maoists.

This was inevitable after it became clear that to over come the pressure and contain the Maoists,Jharkhand needed Bihar’s backing.And as such Jharkhand police contacted Bihar to launch joint operations against them in border areas,sources told www.jharkhandstatenews.com.

Sources say that the decision to launch joint operations was taken after Maoist guerrillas ambushed a police party, killing five policemen and two others at Kalapahari in Jharkhand’s Palamau district on Wednesday evening.

Jharkhand IG(Operation) M.S.Bhatia said:“We have contacted Bihar to launch joint operation against Maoist guerrillas in bordering areas of Aurangabad district of Bihar and adjacent areas of the both states.”

It is learnt that in the landmine blast, CPI-Maoist zonal commander Niteshji had played a key role.”He operates both in Bihar and Jharkhand. Only joint operation can curb his activities in the areas,” Mr Bhatia said.