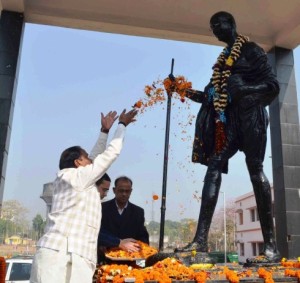 On the day when the entire nation remembered Mahatma Gandhi on his 68th death anniversary,Jharkhand Chief Minister Raghubar Das led Jharkhand in paying homage to the father of the nation in Jamshedpur.

Like President Mukherjee, Vice President Hamid Ansari and Prime Minister Modi who paid floral tributes at Gandhi’s memorial at Rajghat in the national capital,Jharkhand CM did the same at Ggandhi Maidan in Jamshedpur..

Defence Minister Manohar Parrikar and Urban Development minister M Venkaiah Naidu were among those who paid homage to the Father of the Nation at Rajghat, where an inter-religion prayer was held.