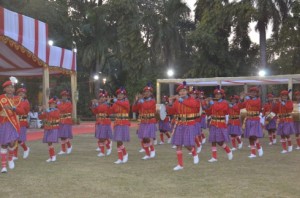 Picture One shows Governor Draupadi Murmu handing over award to IPRD Director A.K.Pandey. Two shows the band played by NCC cadets inside the Raj Bhawan in Ranchi on january 27,2016.

The tableau displayed by Jharkhand Information and Public Relations Department on the 27th Republic Day function at Morahabadi Maidan in Ranchi on January 26 secured the first rank.

The award for the second and third position holders of the tableaux were the state education department and the water and cleanliness department respectively.Governor Murmu handed over awards to their representatives as well.