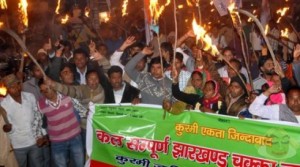 The Kurmi community has threatened to launch economic blockade in Jharkhand if they don’t get enlisted in the category of Schedule Tribe.

The community members under the banner of Kurmi Sena, Kurmi Samaj and similar organisations took out a procession in Sakchi locality in Jamshedpur and burnt the effigy of Jharkhand Chief Minister.

Leaders of the community Harmohan Mahato and Shailendra Mahato have alleged that the concerned Union Ministry was against the inclusion of the Kurmis, who represent a large population of the state, in the Schedule Tribe category.

“We strongly oppose such move of the government as the condition of Kurmis remained bad,” they claimed while demanding for inclusion in the Schedule Tribe category.