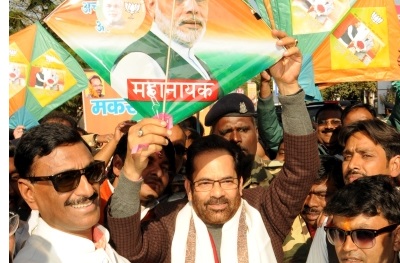 Every body knows NAMO means Narendra Modi, Prime Minister of India.The Patang which was flown into the sky carried his picture.

As the NAMO kites went into the sky,the crowd clapped and cheeredat the kite festival-cum-competition.Obviously,these kites were both papered and peppered with political messages – in Ranchi before the Makar Sankranti on january 14.

More than 1200 people – from schoolchildren and kite runners to BJP supporters and curious spectators – swamped this NaMo Patang Mahotsav.The festival was launched by the rulling party in 2014 when the BJP’s first non-tribal chief minister in the state in 2015 when Raghubar Das had assumed office in Jharkhand.

In his opening address, Das is on record having urged the motley crowd to revive the kite culture. “Flying thepatang is a part of our Indian culture, which we are forgetting in our busy lives. We need to revive it. It is one of the best sports in the world for both the mind and the body,” he said.

At the helm of affairs in an under-developed state, the five-time Jamshedpur East MLA could not hide the political colour of the festival. “Gujarat se udti huyi ye patang rajya ke sabhi elakon mein vikas ke sandesh ke saath jani chahiye,” Das had told the gathering to show his eagerness to develop Jharkhand on the lines of Gujarat.

In the run-up to the festival, the BJP had distributed 5,000 kites, made from glossy paper and featuring Modi,

This time,the kite carried the picture of Modi only These also screamed slogans like ” sabka saath, sabka vikas” and ” chalo chalein Modi ke saath, which were popularised during the parliamentary elections and Assembly polls in Jharkhand.