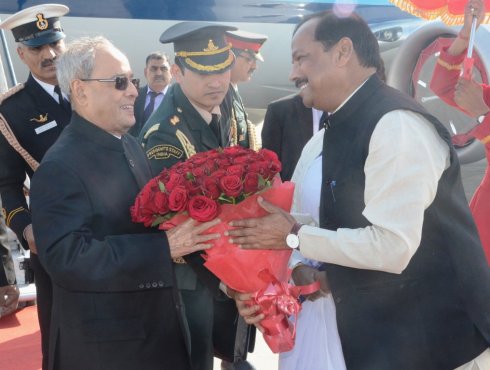 The President of India Pranab Mukherjee today participated in the VIIth Convocation function of the Hazaribagh based Vinoba Bhave University.”By his presence he rocked the convocation function”,said a staff of VBU.

He addressing the faculty and students of this uiniversity and provided degrees to the students.Other than the students,BJP leaader and former Union Minister Yashwant Sinha was awarded an honourary Doctorate in Letters(D.Lit).

In fact,Vinoba Bhave University had come into existence as a teaching-cum-affiliating state university on the 17th of September, 1992, after the bifurcation of Ranchi University,by Act 3 of 1990 passed by Bihar Assembly.

After he arrived in Ranchi,President Mukherjee was welcomed by Jharkhand Governor Draupadi Murmu and its Chief Minister Raghubar Das.Both of them greeted him by offering a bouguet of flowers.

The President Mukherjee also inagurated the art galary at Audre House near the Raj Bhawan in Ranchi.More,he inaugurated the Bang Sahitya Sammelan at Khelgaon and participated in the Diamond Jubilee function of the BIT,Mesra,Ranchi.