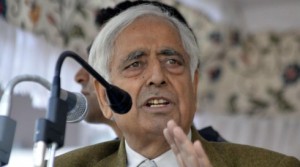 Jammu and Kashmir Chief Minister Mufti Mohammed Sayeed died today at the All India Institute of Medical Sciences where he was under treatment for the past 15 days.

The Chief Minister died around 7.30 a.m., Education Minister and spokesman for the Government Nayeem Akhter said in Delhi.

Sayeed, 79, is survived by his wife, three daughters including PDP president Mehbooba Mufti, and a son.

The mortal remains of the Chief Minister would be flown to Srinagar where the body will be kept for people to have the last glimpse of their leader. He is likely be buried in his ancestral village in South Kashmir.