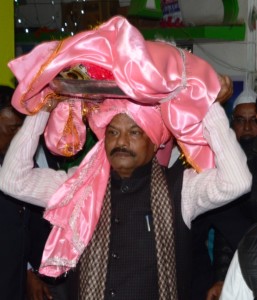 Jharkhand Chief Minister Raghubar Das today concluded the Urs by visiting and offering prayer at the shrine of Baba Risaldar at Doranda locality in Ranchi.carrying it over his head,he performed ‘Chadar Poshi’(bed sheet) there.

The 5-day Urs of Baba Risaldar,starting on Friday and ending today,ended with the CM offering Chadar poshi at Doranda.Other than the CM,hundreds of devotees had thronged the shrine and paid their respect to the saint.

Das said he had come to offer Chadar Poshi to Baba Risaldaar.In fact,religious fervour and gaiety had marked the five day Urs festival, popularly celebrated by the Muslims, at the Doranda ground in Ranchi,every year.

The entire Doranda ground was decked up with food stalls and game stalls.
Sixty-year-old visitor Sharfaraz Ali said he is attending the festival for the past 40 years.”Unity in diversity is the strength of Indian culture.We all remain committed to this tradition”,said the CM

Another visitor Parvez Alam said:”I think it is historical site where festival creates a sense of unity among the Hindus and Muslims every year. I remember that when I was four years old, my parents used to bring me to the festival. I remember the delicious home-made sweets like petha. Today I came to the festival for my favourite sweets.’