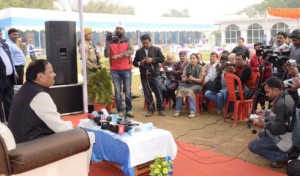 8Giving wishes for the new year,Jharkhand Chief Minister Raghubar Das today said that no body will be without a house by 2022.”The state government is active stepwise toward this end”,said Das.

The CM informed that Union Minister Nitin Gadkari will inaugurate the Rs 9000 Highway project.Though he did not provide the date and venue of Gadkari’s project,the CM said:

“The institutional change is going to be introduced in the MGM to make it strong and wide”..

Stating that his government is committed toward employment generation and empowerment of women,the CM,who addressed media persons at Sidgorda in Jamshedpur based Son Mandap today,said that to achieve the goal,Information Technology will be used.

“The vision of the developed Jharkhand should not be based on its past,but on its future”,said the CM adding that 2016 is the year of the people of villages.

“Soon after(my) government was set,I had promised to provide transparent and accountable administration.In view of this,the state government is moving ahead with the objective of ‘Sabka Saath;Sabka Vikas(Every body’s support;Every body’s development).