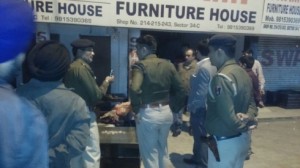 A massive drive was launched by the East Singhbhum district administration against anti-social elements, drunkards, even-teasers on the eve of New Year in the steel city.

Police team conducted raids in and around the steel city and detained over 180 persons from various police station limited, official sources said. They were released on PR Bond, sources said and added that the basic objective was to ensure law and order during the New Year celebrations.

The traffic police has also launched drive against rash and drunk driving. The drive will continue for the next few days, sources added.