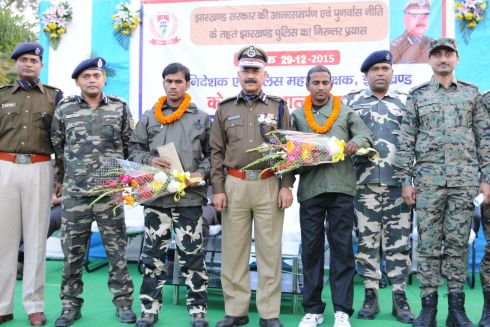 It was the day of the police in Jharkhand where two Maoists surrendered.

Both of them were greeted by the top brass of the police including the DGP D.K.Pandey.They were handed over boquet of flowers by the police personnel.

These Maoists were:Commander Gajendra Saw alias Gujju Saw and Kuldeep Mehta.Though their crime record was not known,they had surrendered before DGP D K Panday and other police officials at Police Headquarter in Ranchi on Tuesday.

Picture by Ratan Lal shows DGP D.Pandey in the middle and the two Maoists who surrendered before him standing on his left and right side.