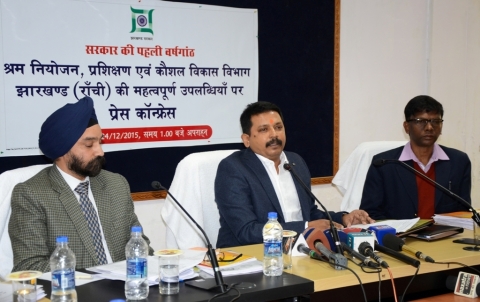 Jharkhand government today announced that it will work to gain ‘Shramik Mitra'(labour friends).

*In the state ‘labour friends'(Shramik Mitra) and labour conversation(Shramik Sambad) will be created.

*The ‘Operation Insaf’ will be carried to enforce payment of wages to labourers as per the law.

*Under the skill development scheme,’Hunar prograamme’ will be run in all 24 districts in Jharkhand,

*The World Bank has appreciated the Jharkhand government for simplification of the labour laws as Jharkhand is on top of the list of states in this regard.

“The state government will make Shramik Mitra in every village who will resolve the problems faced by the labourers.Toward the same end,’Dhava Dul’ will be created which will work under the Operation Insaf scheme of the state government,said the Minister.

“The Dhava Dul will see if the workers were getting wages in accordance with the law or not.More,the workers can inform and apprise the Dul of their problems,if any.Also a Help Line will be set up for the labourers”,said the Minister.