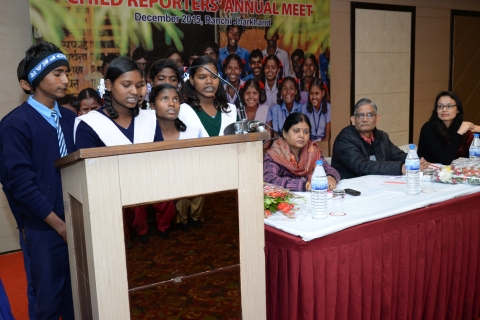 Picture shows the Child Reporters taking part in a meeting organised by UNISEF,Jharkhand in Ranchi on Tuesday.

Ask him if he knows that the Parliament has amended the Juvenile Justice Act(JJA) allowing 16 to 18-year -olds accused of henious crime such as murder,abduction for ransom and rape as adults and pat comes his reply in the affirmative.

‘I welcome this initiative.I am happy because it is going to act as deterrent for the kids to indulge in such crimes”,opined 14 year old conscious child Praveen Kumar.

Kumar is not alone.He is among 300 child reporters,teachers and department officials in Ranchi.Most of them have welcomed the amendment of the JJA.They had gathered in a meeting organised by the UNISEF in Ranchi on Tuesday.

The meeting was organised as part of the UNICEF Jharkhand’s Child Reporters Programmes (Bal Patrakaar Karyakram).The move provides a platform for adolescents to express their views in matters affecting them as per the UN Convention on Rights of the Child (UNCRC).

During the meet the adolescent heroes shared their stories of success and gave expression to their creative sides through the colours in their paintings, words of their poems and through the performing arts.

UNICEF believes that the right of adolescents to express themselves freely and participate in matters/decisions impacting their lives must be respected and promoted.