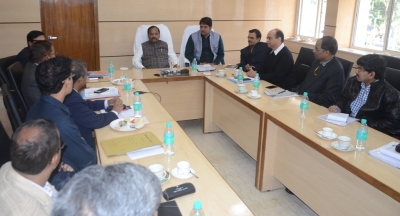 Requesting the Inter Ministerial Central team,Jharkhand chief minister Raghubar Das today said that since the state government has already announced drought in the state and in view of the terrible situation prevalent in many affected areas,its members should visit some of these areas and take appropriate decision as soon as possible.

While discussing the issue with the Central team headed by J.Srivastava inside the Project Bhawan in Ranchi today,the CM said,the state government in its submission had sought Rs 1140.77 crore from the Centre to provide relief to the affected people in Jharkhand.

Das said that to provide relief to the affected farmers,the state government has already provided 10 quintal of rice to every Panchayat.He said that against the average annual rain fall of ,1100-1200 mm,the rain fall, this year had lost timing causing the draught.

“The need of the hour is to repair and maintain pond and wells and build new wells and ponds for the coming year”,the CM said.

He appealed to the Centre to increase the working days under MNREGA from 100 days to 150-200 days so that in the given situation,the draught affected people continue to get jobs.”This will help them quite a bit”,said the CM.

In response,Union Agriculture Department’s Additional Secretary Srivastava said that as soon as the decision taken in this meeting was provided to the team,the action will be taken immediately.Das directed the team to complete the formalities by Monday.