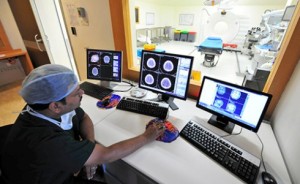 The new Da Vinci Xi System acts as an extension of the doctor’s hands, allowing him or her to perform a surgery with pinpoint accuracy and very little damage to surrounding tissues.

According to Dr. Sanjay Gogoi, Director, Urology and Renal Transplants, FMRI: “The device allows high definition 3D imaging, allowing surgeons to conduct complicated procedures with relative ease. The procedure involves using wristed instruments that bend and rotate far beyond the abilities of the human hand. Moreover, the tremor filtration and intuitive motion technologies allows the surgeons to operate with steady natural motion with the comforts of sitting on an easy chair.”

The first surgery was performed by Dr. Gogoi on a 35-year-old patient from Congo, Central Africa. She had Yousuf’s Syndrome, a condition where due to complications from previous caesarean sections, an anomalous fistulous communication had formed between the uterus and the urinary bladder. This had led to menstrual bleeding draining into the bladder, leading to cyclical hematuria and repeated infections. Occasionally she also had urinary incontinence, as urine would flow into the uterus and leak out.