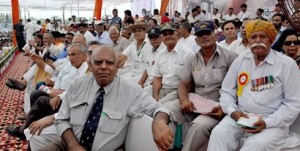 Ex-Servicemen today threatened to intensify the protest over ‘One Rank, One Pension’ (OROP) issue if their demands were not met by the Centre within three weeks. They also decided to not vote for the BJP in the upcoming assembly elections.

The United Front of Ex-servicemen, which is leading the protest, demanded that the Centre appoints “formally” former Army Chief and Union Minister V K Singh as the mediator between them and the government to resolve the issue “immediately”.