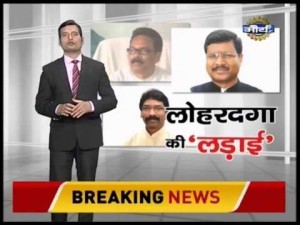 The Congress party has suffered a set back with the Jharkhand Mukti Morcha deciding to remain neutral in the forthcoming by poll in the Lohardaga(Scheduled Tribe)Assembly seat on December 14.

The Lohardaga seat had fallen vacant following conviction of its MLA Kamal Kishore Bhagat of the All Jharkhand Students Union in an attempt to murder case.The JMM’s spokesperson Suprio Bhattacharya today said that the JMM has decided to remain neutral in this by poll.

In the past,it was presumed that the JMM will back the Congress’s candidate Sukhdeo Bhagat.But now if the JMM remains neutral,the Congress candidate Bhagat may face a tough challenge posed by the AJSU’s Neeru Shanti Bhagat,wife of Bhagat,who is being backed by the ruling BJP.