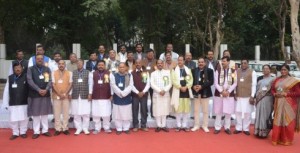 Jharkhand Chief Minister today observed that the forthcoming winter session of the Assembly beginning on December 15 will be utilised for the benefit of the people.

While inaugurating the First Sachetak Sammelan 2015,organised by the state government in Ranchi,Das opined that every day of the winter session should be used in public interest.”As a representative of the people,it is our responsibility to participate in debate inside the Assembly keeping in mind the people’s hopes and expectations”,said the CM.

“Politics is not only the game for power.The power should be involved in the people’s service and the Opposition should stand for reforms.Only then,the light of development will reach the last person in society”,said the CM calling upon the MLAs to attend every day of the Session and keep in mind the limit of their function.

“Normally,the presence of the MLAs during the second part of the day is a cause of concern”,said the CM.