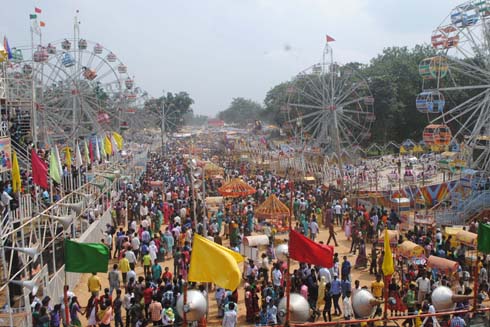 Representational Picture of Mela in Jharkhand

In view of the Saras Mela slated to begin in Ranchi on December 27,Jharkhand Chief Secretary Rajiv Gauba today presided over a meeting of the steering committee.

It was attended by Principal Secretaries/Secretaries of different departments and officers of the State Khadi Gram Udyog Board.

During the meeting,Gauba said that to successfully organise the Saras Mela,the Police headquarter will deploy additional police forces,maintain the traffic system and adopt proper traffic rules and regulations.He directed the concerned officials to depute women police force, and on holidays,appropriate plan should be executed.

In the meeting,it was decided that different departments,like previous years,will set up 200 stalls in the Saras Mela,in addition to the stalls set up by different banks and handicraft companies from different states.

To deal with the need of toilets,the Ranchi Municipal Corporation will set up three Mobile Toilets and keep the premise of the Mela clean.In the meeting,issues connected with the Mela’s publicity and participants’ accomodation,transportation and cultural programme were also discussed.