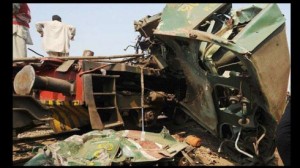 Responding to the the train accident in which 13 persons were killed last night,Jharkhand CM Raghubar Das today expressed his sympathy to the family members of the victims and announced payment of Rs one lakh to each one of them.

“In special situation,Rs one lakh payment has to be made to the family of each victim”,said the state government on behalf of the CM.

In fact, 13 people including five children were killed in Jharkhand when a train hit a vehicle at an unmanned crossing, the police said today.

The accident took place late yesterday night when a family was returning from a temple in a car, added the police.

According to the police, the car’s tyre got stuck in the railway tracks at a crossing in Ramgarh district.

People inside the car tried to get down but a speedy train hit their vehicle which was torn into pieces, said the police.

The torn pieces got stuck in the engine of the train which were somehow detached with the help of local residents.