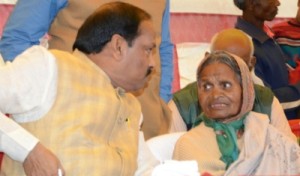 Albert Ekka’s family has refused to accept the urn carrying the ‘sacred earth’ brought from the place of burial of 1971 war martyr.

Albert’s wife Balamdina Ekka and son Vincet have reportedly refused to accept the urn demanding a proof that the ‘sacred earth’ is from the burial place of 1971 war martyr.

Das called on the martyr’s wife Balamdina at her residence, paid tributes at the soldier’s statue before addressing the Martyr Festival at the village organised on the 45th martyrdom of Ekka.