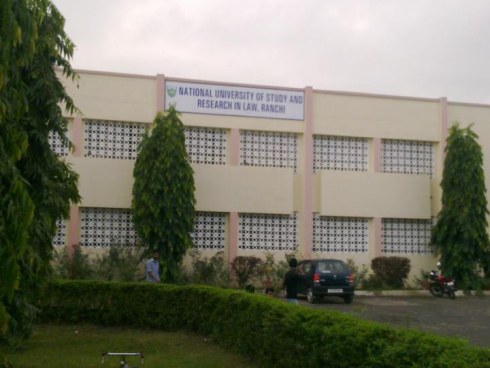 Addressing the event,she said that it was her privilege to be there on this momentous occasion of the First Convocation and congratulated all present there for having successfully able to materialize the vision of founders of this prestigious National University of Study and Research in Law of Ranchi (NUSRL).

“At least one among whom, I have been told is present here as representative of the Visitor of this University”,she said.

“It is quite natural to have a sense of fulfillment and achievement when the first batch of this nascent Institution is rolling out to face and contribute to the world at large. The very fact that within fifteen years of its existence and despite all constraints the State of Jharkhand has been able to, not only set up an institution of the standard of National Law University but has also produced the first batch successfully is a matter of great satisfaction and full credit goes to the vision of the founding fathers of this Institution who took an early step in the right direction”,the Governor said.

“The present institution being one of the same kind is also expected to earn name and fame World over and to enhance the standard of legal education in the State of Jharkhand. The fresh graduates and post-graduates of this great institution, I am fully confident, will demonstrate their potential to the rest of the world, courtesy the knowledge and training which has been imparted to them here in this Institution”,the Governor said.

“Being the first batch the students have an onerous duty upon them to bring good name and fame to the institution as well as the State by their good work. I congratulate them and their mentors for commendable work accomplished on their part and wish them all the best for their future endeavour. I hope and expect that they would be able to bring glory to this pre-dominantly tribal state to the world at large and would lay sound foundation for their alma matter towards its journey of excellence”,the Governor said.

She further said as follows:

“As regards the important of legal education, India has the privilege of being led by a catena of illustrious Barristers and Lawyers throughout its independence movement. The Father of our Nation Mahatma Gandhi was also a Barrister. The contribution of the legal fraternity and law as a subject seems to have greatly influenced the freedom movement of this nation, which followed the principles of Satyagraha and Non-violence. Even otherwise, the system of governance in which we all are at present is commonly called “ Rule of Law”. Under these circumstances, knowledge of law empower one and all. The only question, however, is that as to how you use this strength. To my mind, and I hope all of you will agree, the best way to use your strength is to empower the weak, the deprived, the poor and the needy. Lately, through the legal services authority, the institutions like judiciary has been doing commendable work in spreading legal awareness, empowering the people and providing them with Alternative Dispute Redressal mechanism. I congratulate the Chief Justice of Jharkhand High Court who is the patron-in-chief of the Jharkhand State Legal Services Authority to have contributed a lot for well being of the litigants and other needy people of the State. I expect that fresh graduates, while making out a good career for themselves in the field of their choice would also contribute to the general well being of the society, particularly, the poor, weak and needy as part of their social responsibility.
I am happy to note that despite certain odds and inherent limitation for a new upcoming institution like NUSRL, the Law University has established several research centers including theme specific centers like Tribal Right, Intellectual Property Right, Human Right, Legal Aid, Moot Court Society and like. I was present on one such occasion when the University held National Seminar on Tribal Governance and Tribal Development. I could sense the vibrant strength of the institution and the sincerity and sense of purpose of faculties, students and academicians who had gathered on that occasion.
My dear students, you have earned well deserved graduate and postgraduate degrees with great effort and dedication. I once again congratulate all the recipients of degrees and hope that they are equipped with the knowledge, skill and training gained at this esteemed University, you will be able to properly face the challenges of the competitive world and make important contribution to the progress of the society, state and the nation.”