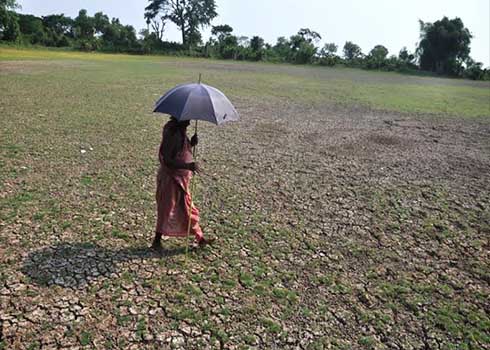 Jharkhand government has launched short and long term measures to provide relief to drought affected farmers in the State.

In the absence of normal rain this monsoon season,paddy crops were badly affected in most parts of Jharkhand.

“Apart from taking short term measures,they should undertake long term moves to improve agriculture in the affected areas”,said Khare today while directing  the officers of the state wide Task Force constituted to deal with the ill effects of the drought in Jharkhand.

Khare directed these officers to prepare the list of development schemes being carried by the concerned Departments;list of beneficiaries; and make them available on their websites.

In his response,Rural Development Principal Secretary N.N.Sinha informed that in the affected village Panchayat,the MNREGA schemes were already launched and the Department was keeping an eye on them.

“Out of Rs 950 crore outlay this fiscal year(2015-16),Rs 700 crore was already spent.In addition,the Department will ensure that among 126 affected Blocks,atleast one scheme is implemented in every village there”,said Sinha.