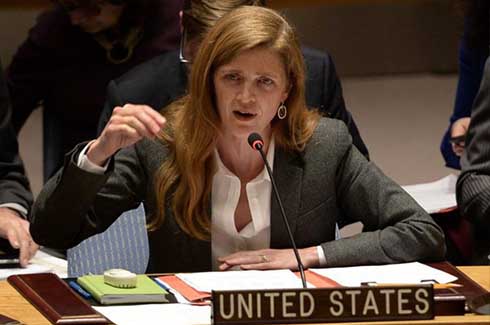 U.S. Permanent Representative to the UNO Travel to India and Sri Lanka

U.S. Ambassador to the United Nations Samantha Power will travel to India and Sri Lanka November 18-23.

In India, Ambassador Power will meet with senior Indian government officials to discuss UN Peacekeeping and the U.S.-India strategic partnership. She will also meet with civil society members and human rights activists.

On Friday, November 20, at 12:05 p.m. IST (1:35 a.m. EDT), Ambassador Power will participate in a moderated discussion at the Women in the World Summit. A livestream of the event will be available at http://nytlive.nytimes.com/womenintheworld/.

Also on Friday, November 20, Ambassador Power will deliver a major speech on UN Peacekeeping at the Indian Council of World Affairs at 3:30 p.m. IST (5:00 a.m. EDT). A livestream of the event will be available at http://icwa.in.

Ambassador Power’s remarks will focus on the vital role that peacekeeping plays in maintaining international peace and security, and she will highlight the key challenges that must be addressed to improve effectiveness. Her speech follows on the significant troop and police contributions that more than fifty countries pledged to UN Peacekeeping operations at the Leaders’ Summit on Peacekeeping, convened by President Obama in September.

In Sri Lanka, Ambassador Power will highlight the United States’ commitment to strengthening the bilateral partnership, and she will underscore U.S. support for the country’s efforts toward reconciliation, accountability, and lasting peace in the aftermath of a devastating civil war. In Colombo, she will meet with senior government officials, community leaders, civil society groups, and youth.

While in Sri Lanka Ambassador Power will travel to the northern city of Jaffna to meet with local government officials and organizations and communities affected by the conflict. There, she will meet with members of the local press corps, including by visiting the headquarters of Uthayan newspaper, which was targeted during the war. Ambassador Power will also participate in the inauguration of a new wing of Osmania College, which suffered significant damage during the conflict, as well as tour the Jaffna Library, where she will announce U.S. support for the local restoration of ancient Tamil manuscripts.