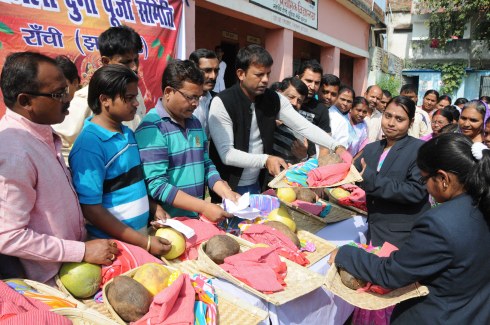 As it is,the first day of the Chhath Puja on Sunday starts with devotees observing –Nahai-Kheai(Bath-Eat)rituals on Sunday.

Traditionally,among the Hindus in Bihar-Jharkhand,Chhath Puja is dedicated to Lord Surya,the Sun God worshipped during four days of Chhath Puja.

The worshipping of Sun God spans for four days. The first day of Chhath is known as Nahay Khay. The holy dip in water body, especially in river Ganga, is taken on this day. Women folks who observe Chhath take only single meal on this day.

The second day of Chhath is known as Kharna. On this day fasting without water is observed from the sunrise to the sunset. The fast is broken just after sunset after making food offering the Sun God. The third day fasting begins after having Prasad on the second day.

A full day fast without water is observed on the third main day of Chhath Puja. Offering Arghya to the setting Sun is the main ritual of the day. It is the only time of the year when Arghya is given to the setting Sun. The third day fasting continues throughout the night. Parana is done on the next day after sunrise.

On the fourth and final day of Chhath, Arghya is given to the rising Sun and it is known as Usha Arghya. The 36 hours long fast is broken after given Arghya to the Sun.