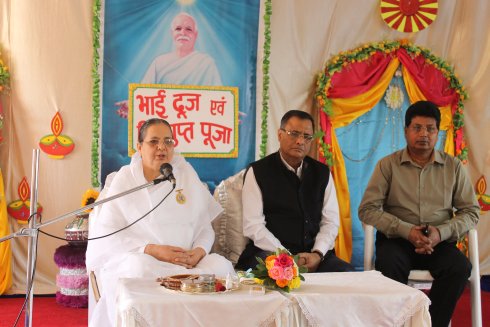 Two religious programmes were organised inside Brahma Kumaris Ashram in Ranchi today.They were connected with the Bhai Dooj and Chitragupta puja.Both these events were participated by Brahma Kumaris.

In fact,each of these festivals has its own meaning and tradition.For instance,Bhai Dooj was associated with the sister applying Teeka on the forehead of the brother,giving him the eatables and in turn receiving the gifts.

As per the tradition,there was a family living in a village that had only a sister and a brother.The sister was very elder to her brother,thus when she got married,the brother was at a very tender age.The boy did not respond any thing about his sister’s marriage.After the marriage,the sister never returned to the mother’s home.

As the brother grew up,the image of the sister started fading with each passing years.He hereby missed his sister,especially on the Bhai Dooj day,as he used to see his friends with Teeka on their forehead and plates full of sweets.

One day of Bhai Dooj,when the boy had become a handsome young boy,he inquired from his mother about the reason as to why his sister never visited her original home after her marriage.The mother replied that she does not come because there is a big river flowing in between.One has to cross the river by boat and then there are wild animals which fill people with so much terror,that many people do not travel through the forest.

The story continues telling only one thing that the custom is prevalent that a brother does not go to the sister’s house for the Teeka;instead sisters bring or send the Teeka and or Prasad to the brother,as danger may lurk on the way.

Similarly,as per the Hindu mythology,the entire world was created by Lord Bramha, the Creator.In the process, Lord Bramha first created 16 Sons from various parts of his own body.

As such,God Chitraguptjee, his 17th creation, is said to be the creation from Lord Bramha’s belly. Thus, Shree Chitraguptjee is the divine incarnation in human form. Called Kayastha since he is the only one created in entirety [Kaya] from the Lord Bramha’s body.

Since this makes a caste called Kayastha who worship Chitragupta Bhagwan,all Kasyastha members and Brahma Kumaris today worshipped this God and remained off the work across the world,including Ranchi.