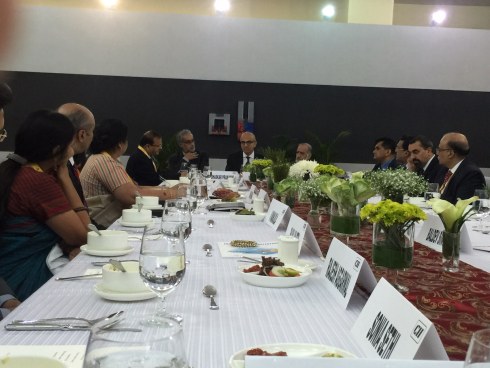 In the discussion Satya Nadella emphasized on building digital capacity of government and society; promote the use of cloud space which Microsoft has developed in India.

As IT Secretary, he mentioned about the potential of the state of Jharkhand which has unique combination of huge rural population and urbanized industrial cities. Besides it has huge base of capable human resources with reputed academic and technical institutions like BIT Meshra, ISM Dhanbad, NIT, XLRI, IIM etc.

Burnwal pitched for strategic partnership with Microsoft for increasing the digital capacity through digital literacy, supporting the promotion of the start ups, innovation and incubation.

In order to increase the connectivity in rural areas of Jharkhand, he emphasized on use of TV, white space technology and starting some pilots in Jharkhand. There is ample unutilized bandwidth under the TV white space and large digital content can be delivered through TV. It will also promote developing digital villages in Jharkhand.

Nadella responded favourably mentioning that the mission of Microsoft is to empower the citizens through technology and Jharkhand would certainly be in its priority given its unique potential. Mr. Kiran Karnik, Chairman, CII, who was coordinating the discussion, also lauded the achievement of Jharkhand in recent time by becoming number three in ‘ease of doing businesses.

On behalf of the Chief Minister of Jharkhand,Burnwal extended and passed on the invitation to Mr. Satya Nadella to visit Jharkhand in his next visit to India.