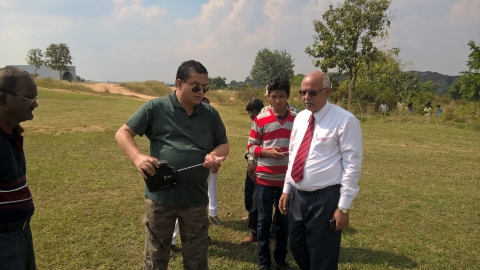 His wife Hazel Davis is in charge of the administration. The family is deeply devoted to social work and are actively associated with the Rotary club of Ranchi North, the International Library and Cultural Centre, the Missionaries of Charity and other charitable organizations.

In addition,Davis is the first successful and oldest accomplished flier in Jharkhand. He flew his first RC model in 1977.

He has many radio controlled models with menthol fuel based glow plug engines ranging from 7.5cc to 20cc which he regularly flies on Sunday in the open fields close to his home in Kanke,Ranchi. He says “though I do not serve in the aviation industry, aviation is in my blood and has been my hobby since childhood”.

Taurian World School, was honoured to have Charles Davis visit the school campus on 3rd November, 2015 to share and enthuse all students and teachers by flying one of his Trainers and 3D aerobatic model which is difficult to handle and fly especially at his age.

However, he has been horning his skills since childhood and put up a good display of aerobatic manoeuvres including loops, rolls, inverted flights, touch and go, low and fast inverted passes, etc. which is otherwise very difficult to control from the field trying to imagine one is sitting in the cockpit. These skills are in high demand by the Army and he also helps the NCC and army when he finds the time.