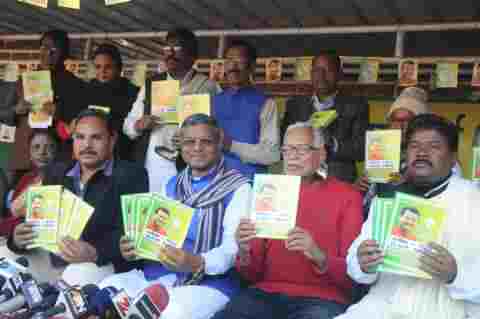 The BJP government led by Chief Minister Raghubar Das was hit by the Opposition party,Jharkhand Vikash Morcha (JVM) Chief and first Jharkhand Chief Minister Babulal Marandi who released a booklet-Black Paper against his government in the state.

In Black paper,Marandi accused him of working against the interest of the people,especially Adivasis in the state.”This government has been working for the rich and the capitalists.Which is why it has sought to amend the CNT and Santhal Pargana Land Tenancy Act”,said the ex CM.

In fact,Marandi along with party General Secretary Pradeep Yadav, released a ‘Black Papers’.These Black papers pointed out that though the process of ‘development’ had ‘stopped’,crime against women and children was the order of the day.

The Black papers were released by Marandi in a press conference in Ranchi on Monday.