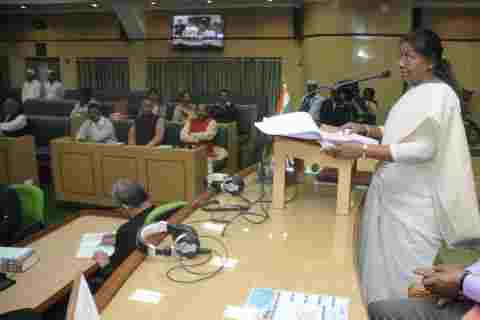 The Budget session of the Jharkhand Assembly began today with the Opposition parties led by Jharkhand Mukti Morcha shouting and interrupting Governor Draupadi Murmu’s address to the Assembly.

During the speech of the Governor Murmu and sloganeering by the Opposition MLAs,some JMM MLAs also jumped into the Well of the Assembly.

The JMM Acting President and ex CM Hemant Soren threatened the BJP government led by Chief Minister Raghubar Das of ‘protest’ across the state if it did not withdraw the amendment of the CNT and the Santhal Pargana Tenancy Act.

In her address,Governor Murmu said that the gap between the people and the state government was minimised.

“There are lots of development opportunities.To attract investment for setting up industries in the state,the state government’s project-Momentum Jharkhand-is a good effort”,said the Governor Murmu.

Alongside,the state government is slated to place the annual budget on January 23,2017.

On January 19,the state government is scheduled to introduce the third supplimentary budget of the current fiscal 2016-17.