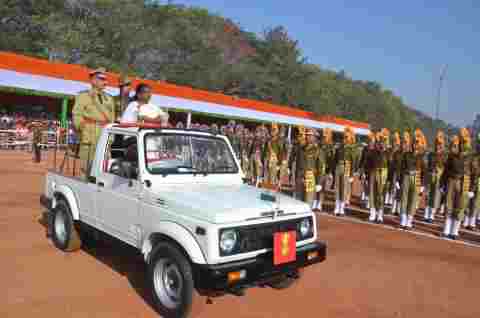 Picture shows Jharkhand Governor Draupadi Murmu accompanied by DGP D.K.Pandey taking salute from the armed forces in Morahabadi Maidan in Ranchi on the occasion of the 68th Republic Day on Monday.

For the first time,woman Governor of Jharkhand Draupadi Murmu hoisted the tri colour at Morahabadi Maidan in Ranchi today.

She along with DGP D.K.Pandey took guard of honour as the state celebrated the 68th Republic Day.She took salute of the armed forces and other security forces as Pandey stood next to her on the vehicle.

While Governor Draupdi Murmu hoisted the tri-colour at Morabadi Ground in Ranchi hundreds of officials,staff of the state government and students of its run schools watched her unfurl the flag.

Murmu became Jharkhand’s first women governor to hoist the flag on Republic Day. She also took salute of the armed forces and other security forces.