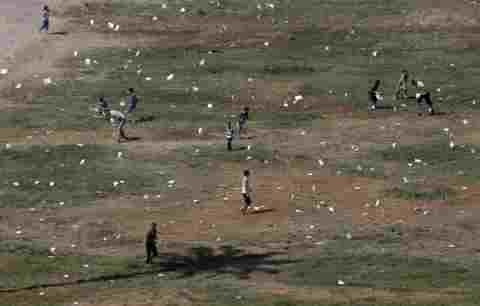 “We welcome the police.We will not let the Maoists thrive now”,said a tribal echoing the opinion of a majority of people of the Maoist infested Simdega in Jharkhand.

Simdega is the area where the Jharkhand police on Friday had used a light aircraft and distributed pamphlets with names and bounty on top functionaries of the People’s Liberation Front of India (PLFI), a splinter group of the CPI( Maoist).

The move,first of its kind in the country,was part of the police initiative to bring awareness among people in these areas about Left-Wing Extremists in a short span of time. “Such initiatives would be taken from time-to-time in the future”,said Jharkhand Police spokesperson R K Mallick.

Mallick is on record saying: “A couple of times in the past, choppers were used for this purpose. But that was a few years ago. This was the first time a light aircraft was used.”

The aircraft belonged to the state government.On Friday,the police claimed,nearly 20,000 pamphlets were air-dropped in Simdega and some areas of Chaibasa and Gumla. The pamphlets carried names of PLFI’s top commanders, including its supremo Dinesh Gop, who carries a bounty of Rs 25 lakh on his head.

Names of 10 other rebels, who have a bounty ranging from Rs 2 lakh to Rs 10 lakh against them, were on the list.

The pamphlets said the identity of the informant, whose tip-off leads to arrest of the extremists, would be kept secret. “It was felt that there was a need to spread public awareness about the extremists. Through air-dropping of pamphlets, we can cover a large area in a short time. The exercise was carried out on the basis of a report from the district SP,” said Mallick.

When asked why aircraft was chosen over a helicopter, he said: “Light aircraft are a better option when large areas need to be covered. Choppers also have logistical issues. Since the state government has the required aircraft, we approached them and they let us use it.”