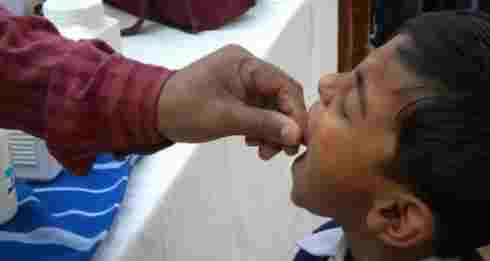 The Jharkhand Matri Sishu Suraksha Evam Poshan Mah (JMSSPM) scheduled from 1 to 28 February 2017 was launched by the Department of Health and Family Welfare and UNICEF here today.

The Additional Chief Secretary, Mr. Sudhir Tripathy said, “The biannual JMSSPM round is being organized from 1 – 28 Feb 2017. A little over 33 lakh children 9- 59 months will be given Vitamin A Supplementation during this round. Last year it was organized from July to 15 August and covered 92% children in the state. The coverage in hard to reach areas was 89%. This year two 2 such rounds are planned. A total of 80,000 bottles of Vitamin A has already been distributed to all districts.

During the month long round the following activities are planned –

§ Vitamin A supplementation will be administered to children 9 -59 months

§ Registration of pregnant and lactating women

§ Counselling on breastfeeding and complementary feeding for children

Dr Madhulika Jonathan, Chief of UNICEF said, “Vitamin A supplementation reduces mortality among children below 5 years by up to 24%. Two high doses of Vitamin- A at an interval of at 6 months is a cost effective way to address Vitamin A deficiency where diet is deficient in Vitamin A. UNICEF is partnering with the Department of Health and Family Welfare, Government of Jharkhand in monitoring Vitamin A supplementation in 2200 hard to reach areas in the State.”