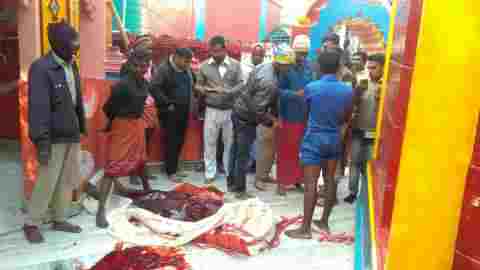 Picture shows the site where this CRPF jawan slit his neck inside Chhinamastika temple in Ramgarh,Jharkhand on Tuesday(January 31,2017) morning.

In a shocking incident,a CRPF jawan is learnt to have committed suicide today morning by slitting his own neck by a sharp knife inside Chhinnamastika temple in Ramgarh district of Jharkhand.

Since the suicide took place right at the place where many devotees of the mother goddess Chhinnamastika sacrificed Bakra (he-goats) on a daily basis,reports said that the CRPF jawan Sanjay Nat too had ‘sacrificed ‘ his own life before the mother goddess.

The temple was locked up and the body was picked by the police and sent to the hospital for postmortem.Sanjay,a resident of Balihar village in Baxar district of Bihar,was posted in Hazaribagh.Before slitting his neck,he is learnt to have taken bath in the nearby Vhairwi river.

“Two days back,he,who was on leave had returned from his village and joined duty”,said the police.