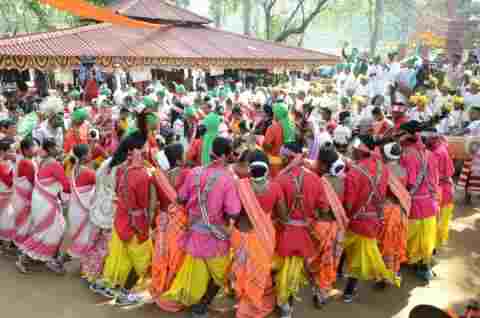 Santhals have rocked the Surajkund International Craft Mela 2017.It is here where Jharkhand is participating in it as a ‘Theme State’.

The Mela  began with Santhlas displaying and interacting with people on the second day of the Mela,They are learnt to have exhibited their talents and culture.

Also,the Santhal tribals exhibited through lively actions and body languages,their nature in general and how eco- friendly life including food.It was displayed as to how they carried a sustainable development.

The participating Santhal community in collectiveness showed their preferences-food-especially rice,houses and their locations in Jharkhand.Many visitors looked happy to have seen their talents in the Surajkund International Craft Mela.

Santhal Tribe is the 3rd largest tribe of India, belonging to the Pre-Aryan period.They were great fighters who waged war against the British in 1855. The Script is called ‘OLCHIKI’.They speak Santhali belonging to the Austro-Asiatic lingua family.

The Jharkhand Pavilion exhibited the Primitive Tribe of Jharkhand called “ASURS & BRIJIAS’.They are ancient iron smiths.In modern days ,their iron making processes are not viable, however, It has been presevered by the Jharkhand State Government and various NGOs.

The ASURS and BRIJIAS exhibited their iron making processes through a furnace made of local clay called ‘MITTI KI KUTTHI’. Local charcoal of the Sal Tree is used as Fuel.The iron ore is heated at a temperature of 1800 degree celcius and flue gas at 250 degree celcius. The famous ASHOKA PILLAR and the KONARK TEMPLE BEAM are made using this technology.

The Jharkhand pavilion also exhibited various native Tribal Dance Forms like the Nagpuri Dance, Karsa Dance and the Akhara Dance and the like among others.

The PHD Chamber of Commerce and Industry is facilitating the Government of Jharkhand through the Administration of Haryana Tourism to provide visibility to the State of Jharkhand effectively in the mela with all its products, art , culture, cuisine, artisans and artists, performers at the carnival and cultural programs and services in an effective manner.