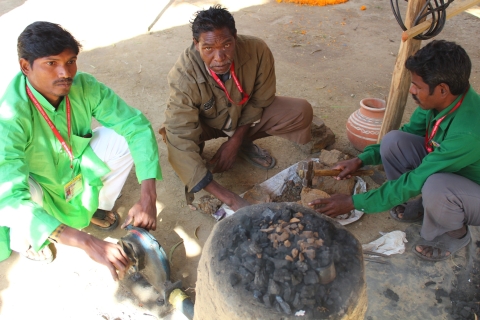 What has become extinct is being displayed by the 31st Surajkund International Crafts mela in Haryana.It is all related with the ancient method to produce iron out of its ores.

This ancient method is kept alive by tribals in Jharkhand.At the Mela site,two primitive tribes-Asurs and Birjias were exhibiting this method making the visitors at the Jharkhand site in the Mela amazed.

In fact,the history of metallurgy in South Asia began prior to the 3rd millennium BCE and continued well into the British Raj. Metals and related concepts are mentioned in various early Vedic age texts. The Indian cultural and commercial contacts with the Near East and the Greco-Roman world enabled an exchange of metallurgic sciences. India’s Mughal Empire further improved the established tradition of metallurgy and metal working in India.

However, the imperial policies of the British Raj led to stagnation of metallurgy in India as the British regulated mining and metallurgy.

The precise manner in which man discovered iron is unknown. Probably its discovery was the result of an accident. It is more likely that iron was first found in ashes of a fire set up by chance near the outcrop of an iron rich mineral. A tribal folklore of central India states that their forefathers first made iron accidentally in a hollow anthill. According to the Folklore, the story is as follows: after cutting the branches and upper stem of sal tree, stubs remain which white ants favoured as a site for an anthill. If the top of an anthill is severed horizontally, it reveals a hollow interior.

Once in order to catch a rat which had entered such an opening, a hunter covered the opening at the top with a red rock. He then bore a horizontal hole at the base, made fire, lighted leaves and blew in the flame through the horizontal hole to force out the rat. Next day he found that a streak of metal had come out of the bored hole, which was more suitable for weapons than anything used before.

Early iron encountered by man was meteoritic iron, and it has been used by the man over at least 5000 years. The history of iron making by tribal artisans in various parts of India dates back to 1300 to 1200 BCE. These tribal artisans such as Asur, Charas, Birziya, Agarias etc., earned their livelihood by steel scrap fabrication in the village and town and catering to local needs.

These very indigenous tribes of Asurs and Birjiyas are exhibiting their ancient methods of iron making at the Jharkhand Pavilion at the 31st Surajkund Mela.

Asur tribe is usually found in the state of Jharkhand in the eastern part of the subcontinent of India. The tribe had been struggling for a long time till 2014, when they finally got the ST (Scheduled Tribe) status.

The modern Asurs are divided into three sub tribal divisons, namely Bir Asur, Birjia Asur, and Agaria Asur. Asurs are considered to be one of the primitive tribal groups. They are found in the districts of Gumla, Lohardaga, Palamu, and Latehar of the Jharkhand state.

The archaeological evidence has confirmed that iron technology began only during the late second millennium BC and it has been proved to be of indigenous origin. The ancient Indian community associated with this craft, were these Agarias and other tribes worshipping God `Asura’. They developed their own secret technology of iron smelting to produce iron and steel of excellent quality.

Ramdhani Birjia along with Wifaiya Birjia of Kumbla district, Jharkhand at Surajkund Mela says that there are mainly three kind of rocks from which the iron ore is extracted, Gatta, Tumba (red coloured rock), Pote (biscuit type rock). He says during Ashoka’s time, the Magadh’s army got iron for the first time due to which they dominated the opponent.

Traditionally, the Asur have been the iron smelters and slash burn cultivators. They used to prepare charcoal from green salwood on the bank of river tanks. They used to smelt iron ore and supply iron to Lohara for the preparation of iron tools. But forest acts and regulations have snatched away their traditional rights over the forest. The modern cost effective technology for making iron has also put an end to their practice of iron smelting and shifting cultivation.

The art of making iron ore from the Gatta rock has been exhibited in the Surajkund Mela.

The quality and chemical excellence of cast iron produced in ancient India by these tribal iron craftsman can be judged by references to its use during the Chandragupta times, when India was looked upon, even by Imperial Rome, as the most skilled of the nations in such chemical industries as iron making, dyeing, tanning, soap making, glass and cement.

The tempering of steel was brought in ancient India to a perfection unknown in Europe till our own times; King Porus is said to have selected, as a specially valuable gift for Alexander, not gold or silver, but thirty pounds of steel. The Moslems took much of this Hindu chemical science and industry to the Near East and Europe; the secret of manufacturing “Damascus” blades, for example, was taken by the Arabs from the Persians, and by the Persians from India.

The Greek historian Herodotus observed that “Indian and the Persian army used arrows tipped with iron.”

Ancient Romans used armour and cutlery made of Indian iron. Pliny the Elder also mentioned Indian iron. Muhammad al-Idrisi wrote the Hindus excelled in the manufacture of iron, and that it would be impossible to find anything to surpass the edge from Hindwani steel.

Quintus Curtius wrote about an Indian present of steel to Alexander. Ferrum indicum appeared in the list of articles subject to duty under Marcus Aurelius and Commodus. Indian Wootz steel was held in high regard in Europe, and Indian iron was often considered to be the best.

One of the finest example of ancient Indian iron making is the Iron Pillar located in Delhi, India, a 7 m (23 ft) column in the Qutb Minar complex, notable for the rust-resistant composition of the metals used in its construction.

The pillar has attracted the attention of archaeologists and materials scientists because of its high resistance to corrosion, and has been called a “testimony to the high level of skill achieved by the ancient Indian iron smiths in the extraction and processing of iron.” The corrosion resistance results from an even layer of crystalline iron hydrogen phosphate hydrate forming on the high phosphorus content iron, which serves to protect it from the effects of the local Delhi climate.

The Agarias are one of the major tribes of India engaged in the production of iron in Central India, Eastern Uttar Pradesh, Bihar and Orissa. Their main deity is God Asura and there are many other Asur tribes spread over other parts of the country. In the 19th c. AD Verrier Elwin travelled throughout India and published a book about the Agarias and their iron production technology. The Agarias worship Lohasur or Kalabhairao as their tribal God and the whole family including women were engaged in this traditional trade and the technology was maintained as a family trade secret. In the early days due to some reason they were not permitted to settle near the villages and moved from place to place and hence produced iron deep inside the jungles.

The Asurs and Birjiyas of the Agaria tribes use ‘bowl-furnace’ made in one face of a pit i.e., below the ground level. Before operating the furnace the front wall of the furnace is prepared afresh each time.

At Jharkhand’s Bishunpur a training centre by the name of Vikas Bharathi has been set up to train the younger generation. During a study of the Bishunpur furnace, the operation of many other furnaces by the Agarias in the Surguja and Mandla districts of Madhya Pradesh came to light. It was a surprise to find that inside the deep forests of these areas about 100 kg. of iron was being produced until about 20 years back, and that some ancient furnaces continued to be operated to meet the local demand.

The Charcoal used in the furnaces is of indigenous nature and choice of the particular tribe. For making charcoal, women and children go to the forest to collect dry food and green branches of teak, sal and bamboo etc., which are two to three years old. As per the traditional practice they never cut the whole green tree. The wood charcoal is prepared near a river or some water source either by firing the wood in an open heap and then water quenching it at a suitable stage, or by burying the wood inside a pit and then when the wood becomes charred, it is quenched and the pit is covered with green leaves and sand to prevent the access of air. The charcoal is collected the next day when the fire has extinguished. Charcoal pieces of 30 to 50 mm size are used in the furnace and the smaller pieces are used to heat the forge hearth used for secondary refining. Very fine coal dust is mixed with clay and sand and used for preparing the furnace bottom and for closing the mouth in the front wall of the furnace.

Visitors at the Jharkhand Pavilion were seen visibly amazed at such hidden scientific achievements of Indian civilization, which effectively dissipate the perception of ancient India as a land only of snake charmers.