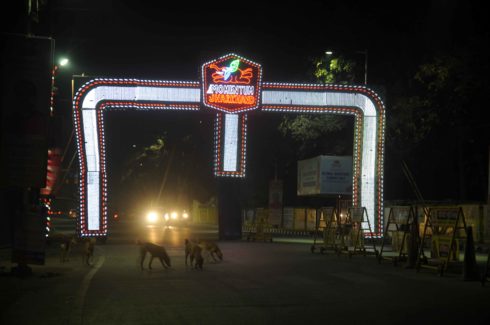 Roads were polished.Footpaths were built afresh.And,eye sharpening lights along the roadsides and electric poles have light up Ranchi,Jharkhand’s capital-venue of the the Raghubar Das government’s mega programme-Global Investors’ Summit.

The two -day summit slated to be held inside the Sports Complex(Khel Gaon) on February 17-18 aims to woo investors and sign MoUs to make them invest and create jobs in the minerally rich state,Jharkhand.

Now,ahead of the summit,all prominent roads in Ranchi were flooded with lights,posters and banners,each carrying the slogans-‘Momentum Jharkhand’- of the summit and picture of the Chief Minister Raghubar Das.

Notably,the summit is going to take place after the Raghubar Das government had set in motion hectic campaigning and lobbying activities in far flung areas including Mumbai,Bengalore aand Kolkata in India and China and USA and sought to reach out to potential investors and invited them to attend the scheduled summit to make it a grand success.

A team, under the chairmanship of chief minister Das,had organised publicity campaigns in cities like Bangalore, Hyderabad, Delhi, Mumbai and Calcutta between July and September and lured Indian investors. These apart, senior government officials together with the CM Das had also toured US-Canada circuit, China-Japan-Korea-Singapore circuit and Australia-New Zealand in the past six months and attempted to get connected with the business communities there and invited them to the upcoming summit.

It is set to be historic atleast for one reason.The state government had spent more than Rs 50 crore and Rs 10 cro9re on advertising the event and touring the cities in the country and abroad respectively.This nhas raised many eyebrows.

In any case,reports claimed that a number of top industrialists including Ratan Tata and Kumar Mangalam Birla are going to take part in the summit.The state government industry department claims that Mous were going to be signed by the investors including Tata and Birla.

Eversince the state was created in 2000,more than 3000 Mous were signed by the state government and the industrialists including Jindal,Tata and L.N.Mittal.However,none of these companies had succeeded in setting up power plants till date due to non availability of land.

Against this backdrop,the Raghubar Das government is faced with a massive challenge.Since many other towns and cities such as Hazaribagh,Daltongunj,Chatra and Khunti many roads were potholed,power cuts was part of a daily routine and drinking water supplied to people was dirty and filthy,their citizens and people living in rural areas were fuming.

“This is the worst government we have seen in the past 17 years”,said Jetan Munda,a school teacher in Ranchi echoing the sentiments of many tribals and non tribals in Jharkhand today.

“Instead of making land available to Mittal and Jindal who had run away from the state and helping businessmen and industrialists of the state who were cribbing and suffering untold miseries due to power cuts,potholed Ranchi-jamshedpur and Ranchi-Daltongunj-Garhwa and Ranchi-Deoghar and Dumka and law and order problem,the Raghubar Das government is spending crores of rupees to gain publicity”,said Tulak Das,a labourer.

To attract attention of investors,the state government had adopterd cricket hero M.S.Dhoni as Brand Ambassador and picked up ‘flying elephant’ as its logo.This had prompted cartoonists show the summit as a farce.Even Opposition leaders such as JMM Acting President Hemant Soren who knew that elephants dont fly quipped saying :”This government is making elephants fly in Jharkhand.’