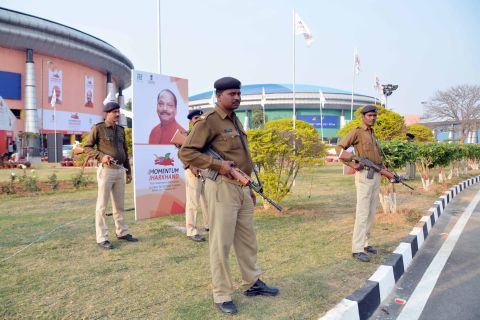 Ratan lal’s picture shows policemen deployed inside the Sports Complex in Ranchi to maintain law and order during the Global Investors’ Summit slated to be held in ranchi on February 17.

Ahead of the Global Investors’ Summit,traffic regulations changing the movement of vehicles were changed and Section 144 of the Cr.PC clamped in Ranchi evenas Jharkhand people’s Party has called for the state wide bandh on February 16 to protest against the state government’s decision to impose prohibitory orders.
.
“This is kind of emergency.We are against it.We will protest against it”,said JPP president Surya Singh Besra.

Securiy forces were tightened.In fact,the traffic regulations were changed and the prohibitory orders were imposed on February 15 and will continue till February 17 keeping in view the planned protests by the opposition against the Summit, scheduled on February 16.

“Imposition of prohibitory order is a violation of human rights and we strongly oppose such move as well as any investment in the state,” President of JPP Surya Singh Besra said during a press conference.

Moreover,Chotanagpur and Santhal Pragana Tenancy Acts protect the land rights of Jharkhand’s tribals and except in a few instances, these old laws ban all transfers of tribal land to non tribals.

“The amendment made in the Tenancy Act and the residential policy framed by the state government were in violation of the constitution,” he claimed.

The two-day Summit is being organised to gain investment,boost per capita income, growth rate and gross domestic product of the state.