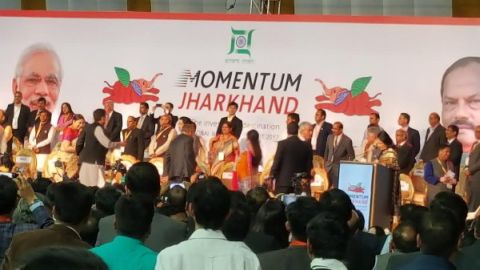 More than one thousands delegates, including many leading industrialists, both Indian and from other countries, will take part in this.
Prime Minister Narendra Modi addressed the summit through video-conferencing saying the move to hold the summit is going to pave the way for investors to land in Jharkhand.

A number of Central Ministers will also be present at the occasion. Venkaiah Naidu, Piyush Goyal, Smriti Irani, Jayant Sinha, Sudershan Bhagat were present.Top industrialists including Ratan Tata,Kumar Mangalm Birla and Shashi Ruia and representatives from more than three dozen countries and several countries such as Japan, Czech Republic, Tunisia and Mongolia were present.

The city is fully geared up- both in terms of massive administrative and security arrangements and decorations all over the city and the venue, for the two-day mega event of ‘Momentum Jarkhand.’